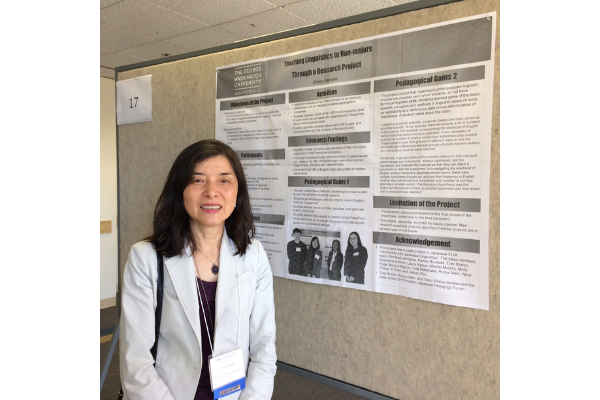 "From Pan ‘Bang’ to Kitto ‘Surely’: Mimetic Expressions in Japanese (and Korean)"

Shoko Hamano, Professor of Japanese and International Affairs, has been teaching at the George Washington University in Washington, DC since 1993. Her primary research interests are in the areas of Japanese language pedagogy and ideophones, or mimetic expressions. In addition to pedagogical Japanese grammars, she has published such works as Nihongo no onomatope: Onshoochoo to koozoo [Onomatopeia in Japanese: Sound Symbolism and Structure] (Kurosio, 2014), “Voicing of Obstruents in Old Japanese: Evidence from the Sound-Symbolic Stratum,” Journal of East Asian Linguistics 9 (2000), and The Sound-Symbolic System of Japanese (CSLI, 1998). The 1998 book is considered to have ushered in rigorous linguistic studies of Japanese mimetic expressions. Recently, she has expanded her research to Korean sound symbolism. This year, she published “Ideophones in Japanese and Korean” in The Handbook of Asian Linguistics, Chris Shei and Saihong Li (eds.) (Routledge, 2022).

Free and Open to the Public (registration required)