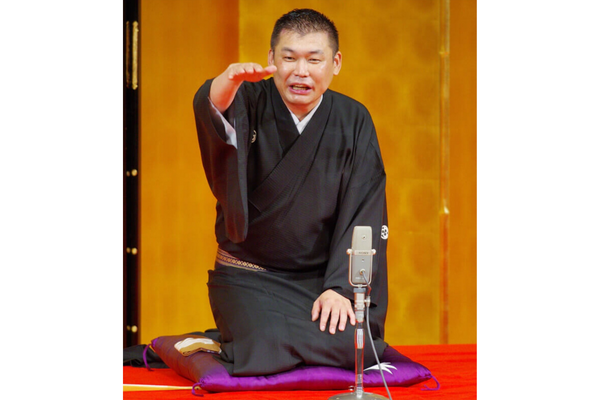 A Night of RAKUGO Storytelling

Abstract: Rakugo (落語) is a traditional Japanese form of solo storytelling in a style similar to “stand-up” comedy but performed entirely in a kneeling position seated on a zabuton cushion. With only a folding paper fan and a folded handkerchief as props, rakugo storytellers rely on eye movements, facial expressions, and body language to help convey their stories. Yanagiya Tōzaburo is a master rakugo performer with the shin’uchi title. His performance will include Japanese storytelling with English subtitles  (“Tengu sabaki” 天狗裁き, “Goblin’s Judgment”) and an English storytelling piece (“SHINIGAMI”), followed by Q&A. Come and join us for an evening of exposure to one of Japan’s classical forms of entertainment. Download the PDF flyer here.

Born in Tokyo, Tozaburo “Zabu” Yanagiya Ⅲ trained under master RAKUGO performer Yanagiya Gontaro III and was promoted to the master shin’uchi rank, the highest rank in the RAKUGO discipline, in 2014. He has performed on stages across Japan and appeared on the Shōten RAKUGO show and other TV programs. His storytelling repertoire ranges from the classics and modern RAKUGO to original works. He was awarded the 2016 Rookie/New Artist Award in the category of popular entertainment (The 71st Agency for Cultural Affairs of Japan National Arts Festival). Since 2018 he has performed in English. He is currently the president of RAKUGO Association of America. He acquired the first American Artist VISA in the history of RAKUGO and moved to New York, USA, to promote Japan's comedy “らくご（落語）” as “RAKUGO” to the world.