Courses on Korean performance traditions, politics and history to be offered in Spring 2016 as part of Korean eSchool

Courses on Korean performance traditions, politics and history to be offered in Spring 2016 as part of Korean eSchool 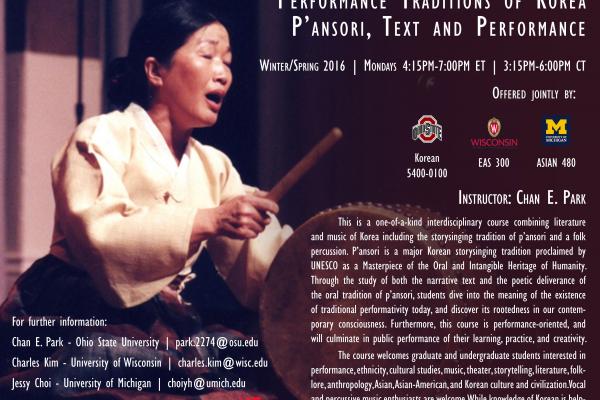 Description
As part of an effort to build a system of shared courses with Korean content among a number of Midwestern schools, the institutional members of the Committee on Institutional Cooperation (CIC), with funding from the Korea Foundation and coordination from the University of Michigan, offer a series of area studies courses on a variety of Korean topics. These course offerings have small enrollments, are simulcast among three universities, and make extensive use of internet-based technologies. The East Asian Studies Center and Institute for Korean Studies coordinate and support the offering of these courses at The Ohio State University. In Spring 2016, OSU will participate in the following three courses:

This is a one-of-a-kind interdisciplinary course combining literature and music of Korea including the storysinging tradition of p'ansori and a folk percussion. P'ansori is a major Korean storysinging tradition proclaimed by UNESCO as a Masterpiece of the Oral and Intangible Heritage of Humanity. Through the study of both the narrative text and the poetic deliverance of the oral tradition of p'ansori, students dive into the meaning of the existence of traditional performativity today, and discover its rootedness in our contemporary consciousness. Furthermore, this course is performance-oriented, and will culminate in public performance of their learning, practice, and creativity.

The main objective of this course is to provide students with the introductory understanding on the Korean peninsula. While we look at various theoretical and historical explanations, this course will focus on the nature of North and South Korean regional rivalry and its global impacts. Students will examine various security issues including North Korean nuclear threat, military alliances, and reunification prospects. In addition, students will discuss several economic issues such as the differential growth paths, South Korea's rapid growth, and recent economic woes in both Koreas.

History 3436: "History of Modern Korea"
Mondays/Wednesdays, 3:30 - 4:45 p.m., 245 Enarson Hall
Taught by Prof. Charles Kim at the University of Wisconsin and shared via videoconference technology with The Ohio State University and Pennsylvania State University

Ever since the establishment of two Korean nation-states after the end of World War II, North Korea and South Korea have been part and parcel of key trends and phenomena in East Asia and the world. As such, the post-1945 history of Korea has been shot through with transformations, dynamism, conflicts, triumphs, and, most of all, the unexpected. This course explores the politics, society, and culture of the two Koreas. Key topics include national division and the Korean War, the Cold War, memory, protest, popular culture, and globalization.

Students may register for the courses via Buckeyelink. Contact Prof. Mitch Lerner, director of the Institute for Korean Studies, at lerner.26@osu.edu with any questions.